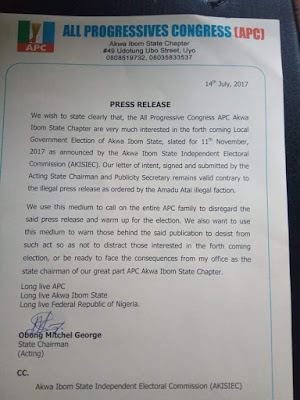 The All Progressives Congress (APC) in Akwa Ibom state has said they will take part in the November 11, 2017 Local Government Elections in the state. This was contained in a press release by the Senator John James Akpanudoedehe faction of the party. In the press release signed by the Ag. State chairman of the party, Obong Mitchel George, the party urged party faithful and the general public to disregard the earlier press release by the Amadu Attai led exco which stated that the party has withdrawn from the election.
Posted by Connoisseur at 10:01