The wife of Commissioner for Housing and Special Duties, Mrs Queen Akan Okon, has expressed her commitment to the overall growth and unity of Ibibio nation as an entity and the generality of Akwa Ibom State at large. She made this known shortly after her induction into the prestigious Mboho Mkparawa Ibibio on Saturday July 8, at the International Headquarters of Mboho Mkparawa Ibibio, Udoudoma Avenue in Uyo, Akwa Ibom State.


The delectable commissioner’s wife who was accompanied by her husband, Mr Akan Okon, said that having been her dream to be a member of Mboho Mkparawa Ibibio for a long time now, she is happy that her dream has come true.
According to her, “this is one of the best thing my husband has done for me and as a proud Ibibio, anything pertaining to Ibibio, I’ll make sure I do my best to do everything that the people would want me to do for Ibibio land. 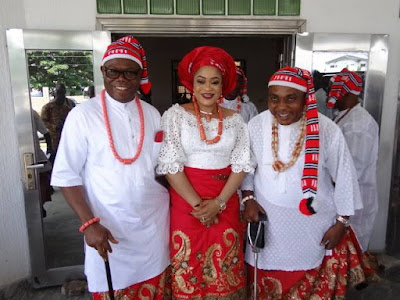 Speaking earlier, her husband and commissioner for Housing and special duties, expressed happiness that his wife is an Ibibio daughter. He disclosed that in the family, they face the same direction and that it would not have been complete that he is a member of MMI and his wife is not and commended the leadership of MMI for finding her fit, to be inducted into the socio-cultural organization. He said that now that they are together in the organization, it has now become mutual that they support each other as they have been doing throughout the years of their marital life as a family, for the growth and upliftment of Mboho Mkparawa Ibibio.
Also speaking on the civic reception of the state Governor, Mr. Udom Gabriel Emmanuel by Ibibio nation on Monday July 10, Mr. Akan Okon noted that Ibibio nation is very proud to have one of their sons as the Governor of Akwa Ibom State at this particular point in time especially as the Governor has not disappointed the people having demonstrated his capacity as a leader of not in the last 25 months by performing beyond the expectation of many and given the economic challenge that is facing the nation and the state. 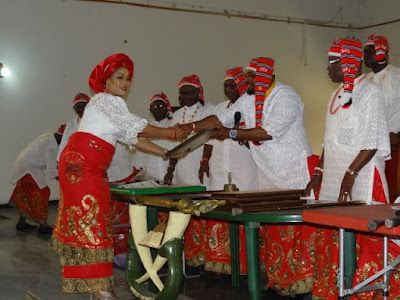 “Governor Udom Emmanuel has used the little that we have to attend to those critical government activities that has direct impact in the lives of the people of our state, so this recognition by Akwa Esop Ima Isong , is going to be in recognition of his excellent performance and I pray that God should continue to guide him and give him the wisdom that is needed to take this state to an enviable height”, he stated.
Meanwhile, the international president of MMI has urged members of turn out in their numbers to accord the state Governor, Mr. Udom Emmanuel the needed support and appreciation during the civic reception in his honour at Asan Ibibio on Monday.
Other personalities who were inducted into Mboho included the transition chairman of Eket, and state chairman of Association of Local Governments of Nigeria (ALGON) Hon. Frank Archibong, transition chairman of Ikot Abasi, Hon.Ubong Udo Ukwang, transition chairman of Ikono Local Government council, Hon. Itoro Columba and the Transition Chairman of Ibeno Local Government, High Chief (Hon) William Henry Mkpa. In his remarks on behalf of his colleagues, the transition chairman of Eket and state chairman of ALGON, Hon. Frank Archibong pledged total loyalty to MMI and promised to carry his people along to identify with the tenets of the organization at all times.
Posted by Connoisseur at 00:24