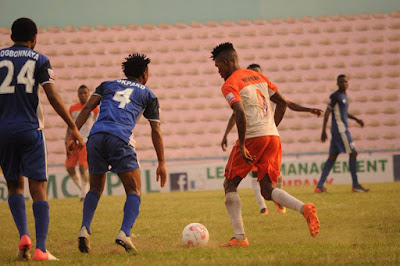 Akwa United cruised to third place on the Nigeria Professional Football League table with a 1-0 victory over Enyimba International at the Godswill Akpabio International stadium in Uyo on Sunday.
In form striker Musa Newman scored the only goal of the crucial encounter in the 15th minute tucking in Ubong Friday's excellent cross.


Newman's 4th goal in four matches and his 7th of the season was enough to secure three precious points for the Promise Keepers who have now gone unbeaten in 14 matches at the Nest of Champions.
A blistering start by both teams witnessed lots of attacking play but defenders at both ends of the field were in their right element to deny all forms of early penetrations.
Akwa United players and the coaching crew were highly motivated going into the game following the presentation of Award of excellence to Coach Abdul Maikaba and midfielder Alhassan Ibrahim as manager and player of the month of April by the League Bloggers shortly before the start of the epic encounter.
Persistent attacking football by Coach Maikaba's boys backed up by vocal supporters paid off nicely in the 15th minute after some brilliant exchange of passes in the midfield orchestrated by Ifeanyi Ifeanyi, Cyril Olisema and Alhassan Ibrahim, picked out Friday on the left wing. The winger delivered a clever cross inside the six yard box for Newman to score the all important goal.
After the early goal, the Promise Keepers pushed hard to double their lead but their efforts yielded no dividends just as the visitors attempts to equalise were constantly checked by the water-tight defense marshalled by Captain Otobong Effiong, Ariwachukwu Emmanuel, Godspower Igudia and Kodjovi Dadzie.
Despite both teams throwing everything forward and making three substitutions each in the second half, the scoreline remained unchanged as the 2015 Federation Cup champions held on to record their 12th victory of the season.
The win moved Akwa United to 3rd position on the log with 43 points from 26 matches with one outstanding match.
The Uyo based side will next engage league leaders Plateau United this weekend in Jos.

Posted by Connoisseur at 16:40