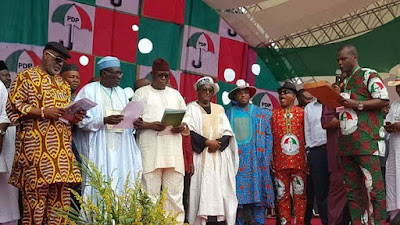 Rivers State Governor , Nyesom Ezenwo Wike has declared that the judgment of the Supreme Court on the PDP crisis is a victory for democracy as the nation will now have a viable opposition.
Speaking after the Supreme Court in Abuja on Wednesday, Governor Wike said: "This judgment shows that there will be opposition in Nigeria.

"I am very happy. Rivers people are very happy because we have no other party aside the PDP".
The governor said that the PDP will emerge from the crisis stronger because all stakeholders will work hard to rebuild the party.
He urged Senator Ali Modu Sheriff and his supporters to keep their word and work with other stakeholders in the interest of the party.
The governor said that the former PDP Chairman called him last week to assure him that he will respect whatever decision reached by the Supreme Court .
"I urge them to keep their word. All of us will work together to re-position the party. The party will go back to the drawing board to move ahead ", the governor said.
He added: "I don't see any reason why Sheriff will not be a part of the party. He spoke to me last week that whatever the situation he will remain in the party".
He said that at the end of the day, it is expected that the Caretaker Committee Chairman of PDP, Senator Ahmed Makarfi will meet with all stakeholders to plan the time table for a national convention.
Governor Wike congratulated all the members of the party for their victory at the Supreme Court, urging them to build bridges of friendship to further strengthen the party.
Posted by Connoisseur at 04:09