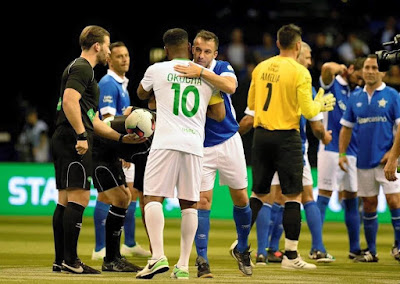 Nigeria lost 2 – 1 to Italy in their second game at the ongoing Star Sixes tournament in England.

Italy legends opened the scoring thorugh skipper Alessandro Del Piero when he tapped in from close range after Peter Rufai spilled a long range effort in his part.

Stefano Fiore added the second when he fired in from outside the box to put Italy 2 – 0 up against the Super Eagles legends.
The goal was AIyegbeni’s third in the competition after he scored two against China in the first group game which the Eagles won 3 – 2 at the O2 Arena
Posted by Connoisseur at 05:55