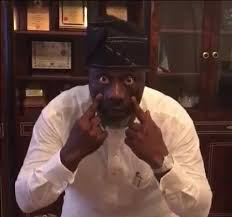 
Recall that an Abuja Federal High Court had last week ordered the Commission to maintain “status quo” pending the determination of a suit filed by Melaye challenging the process.
Speaking on Thursday, Soyebi said INEC would appeal the ruling.
He said, “The Independent National Electoral Commission (INEC) held its regular weekly today and considered the order given by the federal high court, Abuja dated 6th July 2017 directing the ‘parties to maintain status quo till the determination of the plaintiff’s motion on notice’ in respect of the suit filed by senator Dino Melaye seeking orders of injunction against the commission, to stop it from acting on the petition by the registered voters of Kogi west senatorial district,” he said in a statement.
“As a responsible, law-abiding institution, INEC will comply with the order. However, the commission has also decided to take immediate steps to vacate the court order and for the matter to be heard expeditiously.
“Whereas, the court adjourned hearing of the motion on notice on 29th September 2017, it should be noted that section 69 of the 1999 constitution of the federal republic of Nigeria (as amended) sets a limit of 90 days from the date of the presentation of the petition (21st June, 2017) for the exercise to be completed.
“The commission also at its meeting today, approved a policy of comprehensive audit after all elections. This is in line with its commitment of ensuring transparency and overall improvement of the electoral process.”
Posted by Connoisseur at 12:35