Osinbajo Surprises Wife With Midnight Cake for Her 50th Birthday 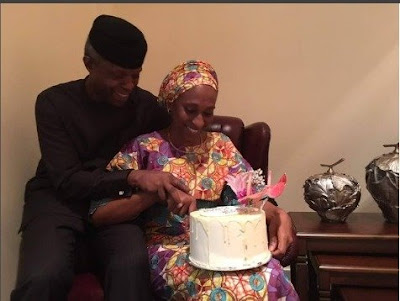 Vice President Yemi Osinbajo is the sweetest man in the world, as far as fans are concerned.
Today, his wife, Dolapo, took to her Instagram to share a heartwarming photo of them posing with a cake she said he gave her at midnight, in time for her 50th birthday.
“Thanking God for 50 years of His grace. #CakeAtMidnight,” she said in the post.


And this was all it took for fans to crown the VP the loveliest husband in the world.
The power couple has been married for 27 years and have three beautiful children together; a son and two daughters. Their relationship continues to warm the hearts of many Nigerians ever since the 60-year-old legal practitioner and minister joined President Buhari as the vice.
Beyond being a power figure in the political arena, Yemi and Dolapo founded “The Orderly Society Trust”, a non- governmental organization that is dedicated to the promotion of Christian ethics and orderliness. And since she became the wife of the Vice President, Dolapo has championed many charity causes, including helping physically abused children.
Now, she has turned 50 and her husband, who is still desperately in love with her, did what many young couple should emulate: surprising her with a cake at midnight.
Happy birthday to you, Dolapo Osinbajo!

Posted by Connoisseur at 05:36