Evans has not “vanished” from our custody, ACP Abba Kyari blasts Sun Newspaper


ACP Abba Kyari, the police officer who led the operation that saw the capture of Evans, has debunked the newspaper report on Sun that the dreaded billionaire kidnapper has “vanished” from police custody.


ACP Kyari said the report is a big lie, reiterating that they have a court order to detain Evans for atleast 3 months in order to carry out their investigations.
As captured by Connoisseur, Kyari took to his Facebook page to disabuse the minds of members of the public who might have been misled by the newspaper headline. 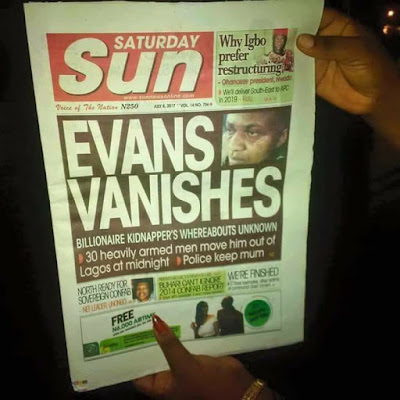 “Friends, I received over a Thousand Calls this Morning. Pls Disregard the Fake news From a Major Newspaper Today that The Most Notorious Kidnapper in the History of Nigeria Evans in our Custody has Vanished. It's a Big Lie. In Accordance with the 90 Days Remand Order from Federal Highcourt, investigation Covering 3 Countries is in Progress. It’s a False Headline, We can Never Joke with the Security of Nigerians.”
Posted by Connoisseur at 05:32