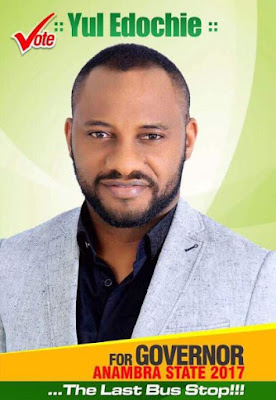 One of Pete Edochie’s sons, Yul, has declared his intention to run for Governor of Anambra State later this year. Yul, who is also an actor like his father, took to his Twitter page to reveal his ambition and upload his campaign poster. He, however, did not disclose the political party he intends to use as a platform. He also stated that Anambra, “needs a new brand of leaders, who will put the masses first.”


He wrote, “My name is Yul Edochie. And I’m running for Governor of Anambra State. 2017 #TheLastbusStop
“We need a new brand of Leaders who will put the masses first, the older ones have failed us…They have come to the THE LAST BUS STOP!!!”
The elections have been scheduled for November 18.
Posted by Connoisseur at 11:51