In what many social media commentators have already described as another classic case of indigenes uniting for a common good of a state, indigenes and residents of Akwa Ibom state are currently engaging in a new challenge which they take up the responsibility of telling the world the positive things about the state.


Christened the “The Akwa Ibom Positivity Challenge”, the new challenge involves each indigene of Akwa Ibom or anyone resident in the state to make a post on any social media platform, (one post per day for three days) about the positive things they like about Akwa Ibom state.
In their posts which has elicited widespread commendations and expression of interests from many Akwa Ibom people to join the campaign, a professional counselor, Udeme Okono , an award-winning journalist Edidiong Udobia and an influential blogger Prince Bassey and a Social Media Influencer Edidem Edidiong Akpabio, have taken their turns to highlight the many positives that stand Akwa Ibom out as a state in Nigeria. 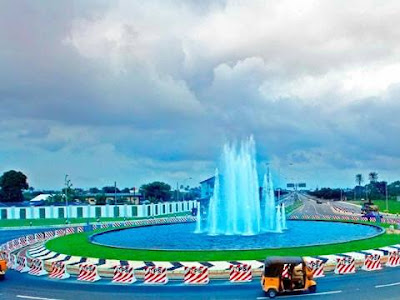 While Okono took time to point out the rich and Unique raffia heritage and craftwork in Ikot Ekpene which has for several years, brought economic benefits to the craft makers. “If you have ever bought a raffia palm slippers, eaten Isiewu in a wooden pot, used a raffia hand fan, chances are that those products were #MadeinAkwaIbom” Mr Okono highlighted on a post on his Facebook timeline. For Mr Edidiong Akpabio, Akwa Ibom is a fountain for a highly nutritional quality of palm oil.
“Just so we remember Akwa Ibom state has been a source of at least 70% of palm oil consumed all over Nigeria and still producing”. 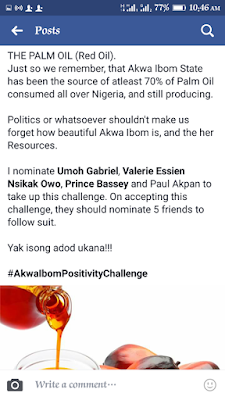 “If you love coconut, then you should love Akwa Ibom!” This is how Mr Edidiong Udobia preferred to open his first post on the positive things he loves about Akwa Ibom state. For the journalist and Media aide, there is a growing evidence that Akwa Ibom state has the best species of coconut and “this explains why even outsiders come to the state to buy in large quantities for sale”. He is optimistic that the ongoing coconut plantation effort by the Akwa Ibom state government might just be “the first step to a much bigger dream”. 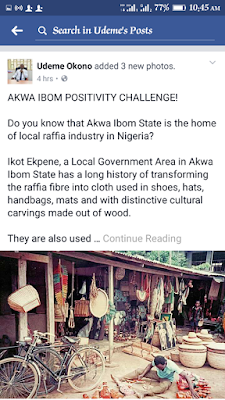 Prince Bassey, a blogger prefers to point people to the huge tourism potentials in the state by focusing on the tourist attraction which he insist will be a delight to anyone seeking a good destination for personal or family leisure as well as official getaways. “Akwa Ibom is blessed with fascinating historical relics, famous among them, the Lord Luggard’s residence in Ikot Abasi – which is a one storey building where Lord Luggard lived during the Amalgamation period” he highlighted in his post. 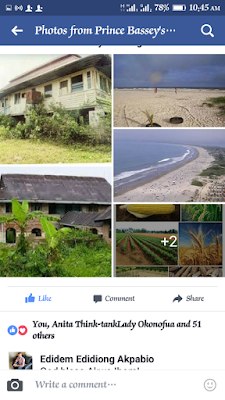 Progenitor of the “Akwa Ibom Positivity Challenge” Mr Borono Bassey, who works for a Private University in Akwa Ibom, told “Agog.ng” that he introduced the campaign as a way of getting more Akwa Ibom people actively involved in pushing a positive narrative about Akwa Ibom state. 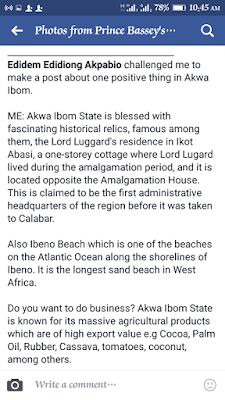 “We have positive things that set us apart as a people. We have had conquests. We are on a way to greatness and so we can tell our own stories the way we want to be seen. If we live our stories for others to tell, there is a great chance that such stories may not portray us in a positive light. Good news can sell. We are going to use the Akwa Ibom state story as a proof”, he said.
Akwa Ibom state is located in the South-South region of Nigeria. It will celebrate its anniversary of creation as a state by September.
Posted by Connoisseur at 04:04