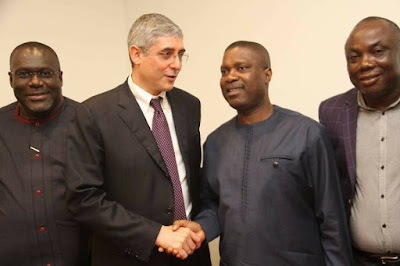 The Managing Director of the Nigerian Agip Oil Company, NAOC, Mr. Massimo Insulla, has described as transparent and committed the current Board and Management of the Niger Delta Development Commission, NDDC, declaring that his company was eager for a stronger partnership with the Commission towards developing the Niger Delta region.

Mr. Insulla was speaking when he led a team from NAOC, a subsidiary of Eni, the Italian oil giant, to pay a historic visit to NDDC headquarters in Port Harcourt on Thursday. He said he was impressed with the strategies adopted by the Commission’s Board.
He said: “There is an opportunity to partner and I am open to continue the dialogue that was initiated by the Honourable Minister of Petroleum and Honourable Minister of Niger Delta Affairs. There is a different spirit here that has increased the tempo of activities geared towards fast tracking regional development.”
Mr. Insulla said that the oil companies were making significant contributions to the budget of the NDDC and as such had a big stake in the Niger Delta project. He added: “We are excited by the practical approach of the new board and management and we are ready to cooperate with NDDC to do more for the people.”
NDDC Managing Director, Mr. Nsima Ekere, reassured that the Commission was committed to doing things differently, declaring: “One of the things we have done is to see that the money you have contributed to the NDDC fund is used in a responsible, transparent and efficient manner, and it starts from the budgetary process.”
Ekere stated that the new management owed it to Nigerians, the people of the Niger Delta, stakeholders of the Niger Delta and the Federal Government to ensure true regional development, adding that the new spirit was a necessary foundation for progress.
He said: “We believe that we can collaborate with you so that you can continue to carry out your Corporate Social Responsibility. NDDC will help you to do more so that your host communities will be peaceful. If your host communities are peaceful, you will have a conducive environment to work, your output will be better, and your returns to your shareholders will be better.” 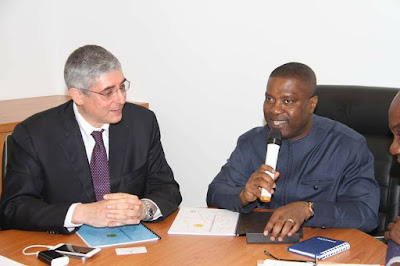 He commended the AGIP Chief Executive Officer, stating that the management of NAOC had in the last couple of months shown a renewed commitment to the development of the Niger Delta. “They have shown that they care about the welfare and provision of necessary infrastructure in their areas of operation,” he said.
Ekere said that the new NDDC had set up budget committees in the nine Niger Delta states to help develop practical budgets “based on needs analysis” and reassured that the committees would collaborate with the state governments for the benefit of the Niger Delta region.
The NDDC boss said that the Commission had started discussions with stakeholders on the proposed Nembe-Brass Road, which he described as a continuation of the Ogbia-Nembe Road in Bayelsa State. He, however, observed that the project would require huge resources.
He, however, stated that the Commission would work with Agip in the area of modular refinery and in fashioning a wastes collection and management strategy for the Niger Delta.

Posted by Connoisseur at 10:35