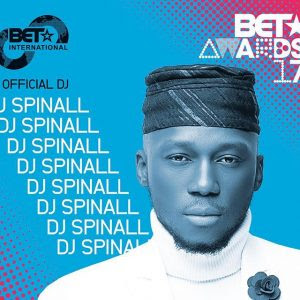 Multiple award-winning DJ Sodamola Oluseye Desmond popularly known as DJ Spinall has been announced as the Official DJ For BET International Awards 2017 which will be held in Los Angeles California.

This is Coming off the back of his successful tour #TheCAPTour2017 touring major cities in South Africa, United States & One Music Festival In London.
DJ Spinall is the first Nigerian DJ to be endorsed by any brand in Africa and also the first African DJ to perform at the SXSW Festival in the United States.
Spinall signed a major deal with Smirnoff Ice drink in 2015 and the contract was renewed in 2016.
DJ Spinall is been managed by State of Mind Entertainment founded by Tobi Sanni-Daniel and the company is known for managing the like’s of the Hip Hop MC Ice Prince.
Spinall  has won different awards such as: World DJ in Nigeria Entertainment Awards  2014,Best Nigerian DJ in Islander International Awards  2014,Best Nigeria VDJ in Nigerian Broadcasters Merit Awards  2014.

Posted by Connoisseur at 15:30