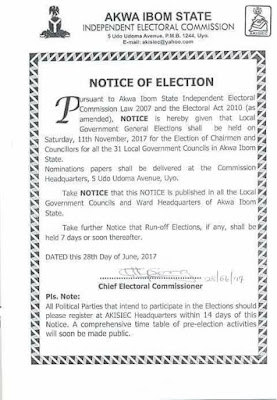 The Akwa Ibom State Independent Electoral Commission (AKISIEC) has fixed November 11, 2017 as the day for the Local Government Elections in the state. This was made known by the Chairman of the electoral body, Mrs Gloria Ukpong during a meeting with top political stakeholders across all the registered political parties in the state. There have been growing agitations for the governor to conduct LG elections two years after he was elected into office. The tenure of the current transition committees is expected to expire on Monday 3rd July, 2017 but it is believed the tenure will be extended by another six months.
Posted by Connoisseur at 10:58