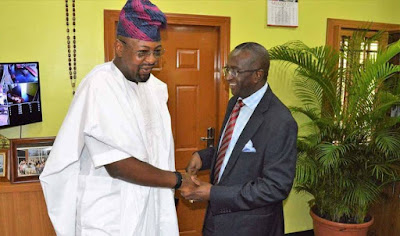 The Director General of the NTDC, Mr. Folorunsho Coker dropped this hint during a courtesy call on the Chairman of NDDC, Senator Victor Ndoma-Egba, SAN, at his office in Abuja.
According to Coker, “since the NDDC is an agent of accelerated change within a section of the country, and it is a place that had been ignored for quite a while, the quickest way to bring about that accelerated change is for the NTDC to find a point of congruence and collaboration with other relevant agencies of Government in the Niger Delta region.”
Coker further stated that “Part of the core responsibilities of the NTDC is the creation of employment and I am sure that coming from Cross-River State, the NDDC chairman must have seen the possibilities of what a tourism economy can do in the life of a people. Tourism by its nature structurally employs a lot of women and youths. It doesn’t necessarily require you to have manufacturing tools and tourism is the largest employer of labour in the world.
“Both the NTDC and the NDDC have different mandates. But when you look at the objectives of the two agencies, you find out that there are points of congruence that we can seek to collaborate on. We know that there are quite a number of cultural heritages sites across the Niger Delta region and our collaboration with the NDDC will ensure that we take an inventory of those sites and make efforts to develop them into business models.”
Responding, the NDDC Chairman said the core mandate of the NDDC as an interventionist agency was to create an integrated regional economy for the Niger Delta region of Nigeria.
Ndoma-Egba noted that, “to drive this vision, we need partnerships with several stakeholders especially with the member state governments. Our goal is to deepen this new partnership beyond the immediate stakeholders. We want to develop partnership with an organization like the NTDC because we also want to go beyond oil. When you mention the Niger Delta, the first thing that comes to your mind is oil. But oil is a finite resource. On its own, it will be exhausted someday. If it is not exhausted, technology will make it irrelevant. Today, we have TELSA cars that have become the choice of people in America and Europe. They are moving away from cars that operate on fossil fuel because of issues on environment concern.”
The NDDC board helmsman added: “So it is incumbent on us as an interventionist agency to start thinking of creating an alternative economy for the Niger Delta region. One of the major things that we are going to do is the setting up of the Niger Delta Development Bank that beyond oil should be able to fund the development of the region. I think the partnership that you seek is even as important as that bank, because we will only be able to develop an economy that is outside oil when we discover viable business investments.
Ndoma-Egba used Cross River State as an example in further explaining the economic benefits of sustainable tourism development.

Posted by Connoisseur at 15:22