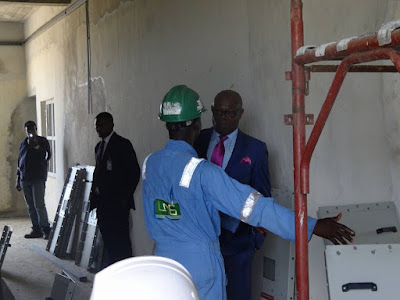 No sooner than later, a power Sub-Station at the Ibom International Airport is set to be commissioned by the Akwa Ibom State Government. The Honourable Commissioner for Housing and Special Duties, Mr Akan Okon announced this, Thursday, during an inspection visit to the Sub- station
According to the Commissioner, the Airport has been running on generators since its establishment and expressed optimism that the new power Sub-Station will reduce the cost of operation while boosting revenue generation for the State.


Mr Okon further stated that the power station is in fulfilment of the desire of Governor Udom Emmanuel in ensuring that the airport which is a major gateway to the state is connected to a dedicated power supply line.
On why the government is interested in the facility, the Housing and Special Duties Commissioner said the Airport opens the State to the world, stressing the government will leave no stone unturned in making sure the Airport attends its Standard.
The Commissioner expressed satisfaction at the level of work at the Sub-Station and urged staff at the Sub-Station it redouble efforts, while the facility await commissioning.
Posted by Connoisseur at 01:03