We are under pressure to release billionaire kidnapper, Evans – Police 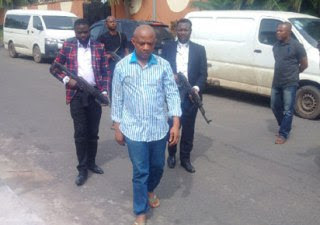 The Lagos Police Command has said that the force is being pressurised to released billionaire kidnapper, Evans. Acting Lagos State Commissioner of Police, Galadanshi Dasuki, while addressing newsmen on Saturday at the Command Headquarters, Ikeja, said that the Police were not in a hurry to release Evans, despite calls from different quarters to do so, Daily Trust reports.


He said, “Evans has been a kidnapper for a long time and has been on the wanted list of the Police in Anambra, Abuja, Enugu, Edo and Lagos states. He also has a criminal gang, some of whom have been arrested in Enugu and Lagos. But there are still more out there. Therefore, this needs a painstaking investigation.
“Besides, we need to under study him as well as debrief him. By so doing, we intend to use his tactics to get others. He will eventually be charged to court after investigation is concluded.”
Posted by Connoisseur at 09:26