Tyson Fury wants to fight Anthony Joshua in Nigeria, says I am the "Nigerian Nightmare" 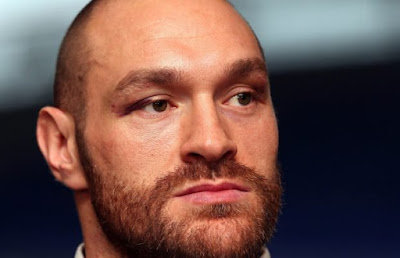 British boxer, Tyson Fury, says he wishes to fight Anthony Joshua in Nigeria. The self-titled ‘Gypsy King’ said this in a chat with iFilmTV.  Fury said, “It may not be at Wembley, the fight might be in Nigeria in Lagos. I’ve heard they’ve got a 180,000-seater there.

“So considering I’m the ‘Nigerian Nightmare’ now then we’ll go over there.
“Or it could be in Ireland at Croke Park, that holds a lot of people or it could be at Wembley, you never know.”
Fury has hinted a September return to the ring for a shot at the IBO, IBF and WBO heavyweight belts.
On Joshua’s win over Wladimir Klitschko, Fury said it was “exciting for a boxing fan, but not so good for an actual boxer taking lots of punishment getting bounced off the canvas”.
“It was good for me because he got the best result, he got a lot of mileage out on the clock and got the win to save my money in the bank.
“He got exposed a bit too, everyone knows he’s not irresistible now because he can be sparkled.
“Klitschko let him off the hook and started boxing – I don’t know what he was doing.
“AJ never threw a punch for three rounds and was wobbling on his feet and Klitschko was just looking at him (like) ‘Shall I knock him out or not’?”

Posted by Connoisseur at 01:21