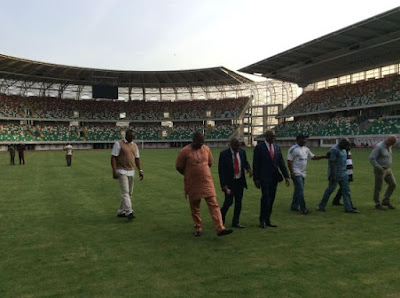 The Nigeria Football Federation (NFF) has moved the Super Eagles' Russia 2018 World Cup qualifier against Cameroon scheduled for August from the Godswill Akpabio Stadium in Uyo to Port Harcourt.


Quoting sources from the NFF, the website said the football house was no longer comfortable with the spate of bad results in Uyo. Super Eagles have won just two games at the magnificent Godswill Akpabio Stadium and the recent loss against South Africa, it said, has convinced the federation that the ground is jinx.
But the NFF says it is moving the game to Port Harcourt based purely on logistics grounds. Transportation to the stadium factored as part of the reasons, as it takes 45 minutes to drive from the hotel of the Super Eagles to the stadium, while the none presence of vocal home support also played a role.
The choice of Port Harcourt is yet to be fully agreed as renovation works at the ground is yet to be completed, so the NFF has placed the Ahmadu Bello Stadium in Kaduna and the national stadium in Abuja on standby.
Is Uyo stadium bad omen for Super Eagles as NFF considers Port Harcourt for game against Cameroon?
Posted by Connoisseur at 04:08