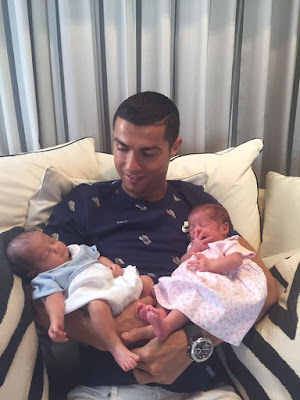 Cristiano Ronaldo is officially a father of three. The Real Madrid player welcomed twins recently, the soccer star announced by sharing a sweet photo to his Facebook page Thursday.
Despite earlier reports of Ronaldo expecting twin sons, the proud new dad is photographed holding one baby in a blue romper and one baby in a pink dress. Ronaldo has yet to confirm the sexes or names of the babies.“So happy to be able to hold the two new loves of my life,” he captioned the snap, in which the twins are sound asleep in their dad’s arms.
Ronaldo’s new little bundles of joy join 7-year-old big brother Cristiano Jr.
Ronaldo has reportedly been dating model Georgina Rodriguez for months, but they only took their relationship public earlier this year, attending the Best FIFA Football Awards together in January.
The athlete and fashion designer has never revealed the mother of his older son publicly, explaining during a Jonathan Ross Show appearance that, “When Cristiano is going to grow up, I am always, always going to say the truth to him because he deserves it, because he is my son.”
Added Ronaldo, 32, “But I am not going to say because people want me to say.”
Ronaldo said he’ll share the woman’s identity with Cristiano Jr. when he feels the time is right, but said that being a single parent “is not a problem.”
“In the world, many kids don’t have mom, don’t have dads or dads die or moms die,” he explained, adding, “Cristiano has a dad, an unbelievable dad, a grandfather, a grandmother. I have the support of my family.”

Posted by Connoisseur at 02:28